I’ve been a passionate fan of the comic and cartoon arts for as long as I can remember. I grew up reading everything from Peanuts and Calvin & Hobbes to the adventures of superheroes, and spent a lot of my free time doodling my own creations and telling stories from my own imagination. I even learned a great deal of the Bible stories I knew at that age from a series of comic book adaptations that my grandparents owned, and that I read over and over. 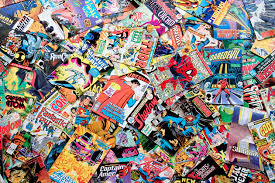 As I grew older, I was introduced to a whole other world of comics–people telling stories that spanned from current events studies like Joe Sacco’s Palestine to gripping personal narrative like Art Spiegelman’s Maus or Marjane Satrapi’s Persepolis.

The great joy for me in reading comics is their ability to capture both the fantastic and the very personal. The combination of art and text allows for powerful storytelling that is unique to the medium.

So, when I learned that Herald Press had received a proposal for a graphic novel that connected Jesus’ social message to stories throughout history, I was very excited. The proposal was brought to us by Sandra Sauder and Paul Buhle, and they had recruited three accomplished comic artists in Sabrina Jones, Gary Dumm, and Nick Thorkelson to help with the project.

Sandra and Paul’s vision for the Radical Jesus project came from the desire to find a way of telling stories of faith in a format that could reach a youth audience. They planned for three sections–”Radical Gospel,” stories from Jesus‘ ministry; “Radical History,” telling stories from the Radical Reformation through abolition; and “Radical Resistance,” which would cover stories from abolition through the Civil Rights movement and of modern peace and justice activists from around the world.

A sample page from Part 1 of Radical Jesus. Artwork by Sabrina Jones.

I was invited to take part in an early meeting discussing the book proposal. That meeting took place in Cleveland in September 2011. During that day, Amy Gingerich, Paul Buhle, Sandra Sauder, Gary and Laura Dumm, and I began planning the scope of the book and started a list of stories to include.

A portion of the Dirk Willems story. Artwork by Gary Dumm.

There was quite a bit of dialogue still to follow as we narrowed down the selection of stories. Soon after, the process was started of writing scripts, editing, re-writing, further editing, seeing initial designs and sketches, and at last watching as final pages arrived from the artists.

This was a new process for all of us at MennoMedia. Comic books have not been our traditional market! But Paul and the artists were gracious in working with us. And the final product reflects the amount of hard work that was put into it by everyone involved. It is a beautiful book, and stands out as a unique piece in our long Mennonite publishing history.

While Radical Jesus is intended as an introduction for youth, I would strongly encourage readers of all ages to give it a chance. Even if you have no familiarity with this genre, I think the book has much to offer anyone interested in how Jesus‘ radical message has made a dramatic impact throughout history.

When I was spending my days as a youth scouring the comics pages, I never imagined I would someday get to be part of telling the stories of my Anabaptist heritage in the art form I love so much. It was a great thrill for me to have been involved in this special project. And I hope as readers that you will enjoy being able to experience these remarkable stories in a fresh and exciting new way.

Joshua Byler is Marketing and Sales Manager for MennoMedia, and still dreams of having the power of flight.

If you’re interested in more about Radical Jesus and are in the New York City area on Sunday, November 17, please check out this event at the 15th Street Friends Meeting. It starts at 12:30pm and is hosted by artists Sabrina Jones and Nick Thorkelson, who will discuss the book. Get your books signed by the artists!